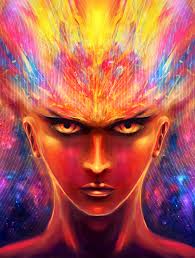 All anger stems from things not going the way you “think” you want them too.  It is very simple to see when you are not “angry.”  But like the definition above, if you have been offended, believed to be wronged, or denied something you want, sometimes it will lead to retaliation.  However, anger is a gift that one can use to begin to know theirSelf.  When you are angry, it can be quite a challenge to see that the only reason you are angry is because you cannot control or manipulate the situation to reflect what you want it to be.  But you can right now begin to use anger as the gift of recognizing that you are not in control, but something, that is not a something...IS.

When it arises here it starts as things do not go as “planned” like this morning there was an intention to get immediately to work on the Tidbit after Meditation but that didn’t happen because the website wasn’t loading and then there was an error on adobe flash player and then a mistake made in correcting it that deleted the object.  So there was this feeling in the pit of the stomach that starts to grow, it is coming up right now because my dog Pete is licking his paw, now you would think that wouldn’t bring up anger, but for some reason it does.  I want to make him stop doing that.  So this feeling again arises in the pit of my stomach, but I know to watch it and not react.  But the feeling does not “feel good.”  I want both the licking and the feeling to go away.  But I know that the true gift comes in not trying to change any of it.  To experience the sensation that is called “anger.”

What it actually is and the true gift that comes to be seen, is that one does not like to not have control and anger comes as a gift to show that you do not have control.  You cannot control other people, you cannot control what is happening around you and you in all truth, have no control over yourself.  As you begin to sit with anger, let it come up and just pay attention to it.  Let the stomach be uncomfortable.  Let the annoyance be there.  You may react or you may not, but start watching whether you do react or whether you sit with it.  Let it rise…sometimes it will grow to a great height (depending on how much you want control).

If you are wise, you will begin to let go of the “wanting” to have control, because that is what anger is … a “wanting” for things to be some other way than what they are.  But can you see how futile that is, if thing are just the way they are, then what is the point of getting angry.  The point LOL and maybe one shouldn’t give all the gifts away, but the point, ultimately, is to begin to show you that you are not doing it, you have not ever done anything in your entire life (not the “you” that you think you are).  The REAL “YOU” has been living life and revealing life to you and you have identified with the thought about what is revealed as “you.”  But you are not a thought, nor are you an emotion, but thoughts and emotions can begin to point you towards who you TRULY Are.

When you honestly see that you do not have control, and that anger is a gift that comes to reveal to you that you are not in control.  Then you may begin to relax into what IS in control, and just see how it will all play out…right in front of you, as it always has, but now you will be aware of it in a diferent way.  Not from trying to make things happen or thinking that you make things happen, but from actually watching what happens.  Like at the movies when you are engrossed in the movie, you sometimes want to tell the movie to do something you think will be best for all involved in the movie, but the movie has already been written so your wants don’t change it, such is the movie of LIFE in front of your eyes as you read this.  It is already written and you are watching it played out.  You can pass the popcorn as you watch it, you can talk about what a great movie it is or isn’t (but please keep it down a notch so others can hear and see it too), but you cannot change it.  You can get angry at the movie for not doing what you want it to, or being too long or not long enough, but the show must go on, because it is already written and anger can be seen as futile or it can be felt as real, as if you were on a ride that is interactive (which it is) but having an interactive ride still doesn’t give you control.  Like when Madden put the interactive joystick on the football game…it gave you a bit more feeling of being in the game…such is the body…it gives you a feeling of being in the game, but just like with Madden Football, you are not in the game, because you are not the body/joystick, you are watching it, watching the playing out the part that has already been programed into the game and so all you get to do really, is watch and feel like you are playing.

THE 13TH FLOOR:  The following trailer is from a movie that is a fun pointer (not actual) to what was shared above.  It has a lot of holes, but it makes one open to many possibilities of the way things can be seen.  It's worth watching the movie if you like the trailer.