TEAM OF ONE (Less Than Actually)... 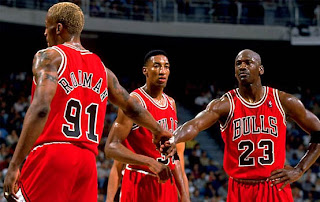 "You are all alone surrounded by all the help you will ever need."
~Wayneji

The other day I put up this article (that I will cut and paste below) and put it on my Facebook page.  I received a comment from a friend of mine that got me thinking about the word/meaning “Team.”  And so I am going to put down what came up around that.

Here is the article:

“Mark used to say to me that sports was his Spirituality and that if I paid attention I would Hear and See it too. It took quite sometime to really start to see what he was pointing to. The other day I was at Family Smiles in Yreka and Kathy was making my mouth piece and I picked up a sports illustrated magazine that had LeBron James on the cover and since I really like LeBron I started reading it and I got to the last two paragraphs of the article in the picture here...and thought what a beautiful way to describe another human being, in this case being LeBron and I Hear the Spirituality that Mark would point to. :o)))))” 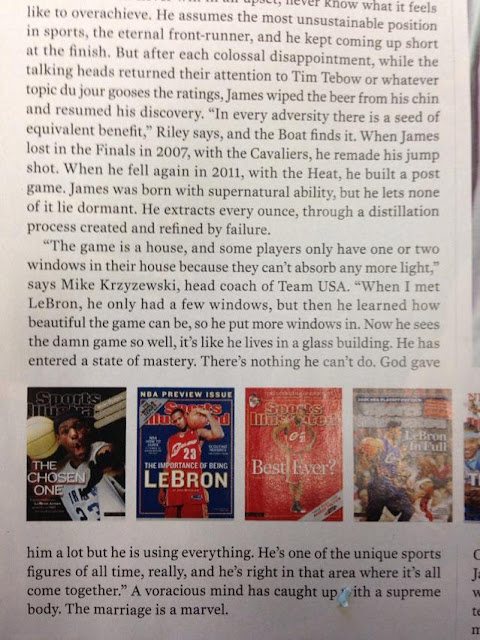 One of the clearest ways to see that one is on a “Team” is to first See and acknowledge how utterly and completely alone one Is.  You can spend years attempting not to See this by searching for a “team” to be on.  But if you are willing to go into the Core of Aloneness, then the window/door opens up to see that there is only One Team … one can ever be on and you are on/in It.  Everyone is on it and no one can be kicked off and so that really begins to allow one to see that we are all working together on the same Team…beyond all appearances, beliefs, dogmas, religions, there is only One Team and we are all on it.

Funny enough, over this last weekend I repeatedly attempted to watch a movie called “Cloud Atlas.”  It is a 3 hour movie and things kept coming up and I kept having to restart it.  I still currently have 45 minutes left of it to watch.  However what I have seen of it is a great pointing to what is being shared here.  That we all keep showing up for one another.

The sayings “you are only as strong as your weakest link” or “wherever you go there you are” are Great sayings and stand the tests of Time because they are True Pointings however, these sayings have been misconstrued because not many venture deep enough into the “unknown” of their Self.  They don’t go all the way to the Core of Being to discover that there is only One (actually less than One…less than Zero…but this is the limitation of words and only can one Know…through Self-Discovery).

There is another saying, “You are all alone, surrounded by all the help you need.”  This is the closest pointing to the Truth of the True Team you are on.  Everyone has had their moment of being all alone.  Feeling they have no one to turn to, no where to go, no one that would understand…these moments are great gifts in revealing what cannot be seen or understood by the mind, because if you can look back on any moment that arrived to reveal to you that you are all Aone…you can see that something showed up for you.  Something did Hear you.  Someone did understand.  Otherwise you would not be reading this right now.  And if you went all the way…to the Core of Being…then you Know who always shows up :o)

One is wise not to run from the “fear” of being Alone…because it is your True Natural State and it is the fear/running from that that keeps you from Knowing who you Are.

Once you see that there is only One (less than) then you know that everything that is happening is perfect because there is only One player Playing…looking like many.  This is called in sports “In the Zone.”  Where one becomes Aware that they are not doing it…it is being done through them.

I was (and still am by loyalty) a Chicago Bulls fan…I was a big fan back with Jordan and Pippen and Grant, Rodman and I remember hearing them speak about being in the zone…there is also a pretty good book on it called “Sacred Hoops: Spiritual Lessons of a Hardwood Warrior. (by Phil Jackson)

Life has all different ways to show you that you are all alone and surrounded by all the help you need.  Sometimes one is called to being physically alone.  Like there are times for me out here on the Ranch where I am completely alone (seemingly and ultimately).  This morning is a good example.  I got back late last night from bringing a friend up to Ashland and I overslept.  I went out to see the chickens and they were all ruffled and clucking…I was an hour behind schedule.  If I don’t show up for them…they don’t eat.  They begin to experience that they are all alone…though they are surround by one another they are all alone in their ability to get food and so I show up and fed them and there is a “team.”  That is what I was seeing this morning that my showing up is part of their “team” they then go on to lay eggs (which I don’t eat but I bring to those that do) which continues the team…everyone is helping each other, they help me by giving me a reason to get up and seeing the girls brings me joy (pun intended) so again all part of the team.  It is the same with the horses.

Being on the Ranch  continually Reveals being all alone and yet being surrounded by all the help one needs.  Since I am about 10 miles from the nearest store, it can seem like one is very physically alone out here, yet it is in those moments that the Awareness of the impossibility of being alone and yet simultaneously being completely Alone appears.  It is a paradox of the Greatest of Gifts.

The owners of the Ranch are currently away and so ultimately I am by all appearances alone out here which leads to a deeper awareness of Trust / Faith that everything that is needed will appear.  And certainly from my times being physically alone…that has revealed itSelf.  It doesn’t mean there isn’t fear at times…like when it snows and I don’t know how I will get the car out or if I  can shovel it all to get to the animals or whatever the fear of the moment is…if the water freezes or it floods…there have been many fears that appear, but as those fears have appeared (being here) has shown me that everything does show up and if it doesn’t the worst that will happen is that this body will die, and it will anyway, when it’s time comes and so even that fear gets faced.