Coming Out of the Closet... 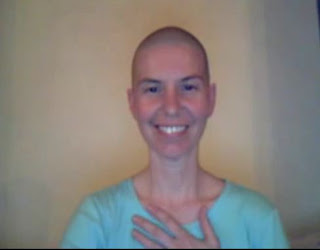 From the picture above you will see that I am not coming out of the closet with what is commonly come out with. :o) However, in a way it is...because in having no hair (and I didn't do it for this purpose, however, in having no hair for the last month, I have become less and less aware of being female (feminine) or male (masculine). Without the attachment to hair (which is pretty intense for a woman...especially this woman...hair was always pretty important), there is less attachment, naturally less, to being seen as feminine (not that I am trying not to be feminine...it just hasn't come up like it did when I had to tend to hair and fix it so it look right to go out or put it up to well do anything). And there is not an attempt to a gender (male or female). There is just being. Not trying to be anything...just not really being anything.

You may wonder why I would shave my head (I say that cause I wonder why I shaved my head) and the answers seems to show up in like "ah ha" moments. There was no reason in the beginning, although there has been an inclination to know what it is like to have no hair and in retrospect...maybe a bit of pulling off of an old skin. However that is all in after the fact...all of what has been seen, has been seen after the action.

There has been plenty of awkwardness about it (it's not "normal" for a woman to shave her head in the society that I have been in) and there is not immunity here to the feelings of embarrassment and not knowing how to explain it and living in a small rural town. It seems that some people look at me like I have an illness...like maybe I have Cancer (which would make more sense than just … this person shaved all their hair off for no reason).

But we are not about making sense around these parts well where I live (which is probably why I find myself very much alone most of the time...not complaining). Because not making sense sometimes scares people...they don't know what to do with it...sheesh I don't know what to do with it...cept I've been hearing to "Let it Be." "Leave the thoughts about everything and anything alone."

So all the thoughts that you may be having about what you just saw...I've had them all too and even to the point that each week on Tuesday (which is my bath and shave day), I wonder to myself...will I shave my head today or let it grow and what I hear is "wait and see." <---not really in words...it's what happens ...waiting and seeing.

Some friends and Family have been pretty accepting of it and some have not (well at first anyway). I didn't know (though I had imagined) just how much I would like it...it really feels natural to have no hair and … there is no hair all over the home (stuck in the vaccum and tub drain) to clean up (which was always gross).

So it's not probably something most people would do and it may make you uncomfortable or think I am a freak or weird (however, there is more of a sense of "normal" without hair...because when there was hair there was a look of "normal" but not a feeling of it...now with no "normal" (hiding behind the hair) there's feelings of normalcy :o) So there is a sense of looking pretty close to how the feelings of being in a human body are...unknown...not so easily defined.

I won't say I'm not a bit nervous about sending this out...even though nobody but me really reads any of this anyway...but there's a good energy about it coming through so we'll go with that.