What Has No Opposite... 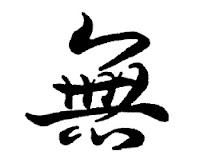 The symbol above is the "MU" symbol which is the Japanese symbol for nothing, no-thing, no place, no one. It represents the indescribable.  One may think that no thing, nothing, is flat but that is not the case...the thing that is no thing...is what everyOne yearns for and yet mistakenly seeks outside theirSelf.

Today there was a looking at bodies, a reading of stories of men and women who have experienced horrible atrocities and then retaliation for those atrocities and also just a sitting with those atrocities and the helplessness one might feel from those atrocities.  This reading once again pushed one back to what those experiences appear in and the revealing once again that the body is not who one is.  This is a giant leap for many and not so far for some...however the reintegration into the world may quickly have one forget that the body is just a vehicle and not who one is.  You will find that as there is less and less importance placed on the body for identity the more clearly this is seen.

For anyone interested in an amazingly well done movie that reveals that we do not  know what anything in this world is for check out "Incendies."  Do not watch the trailer or read the reviews for the best experience of this movie.  It is very intense and not for the weak hearted.

Bodies are in a sense pieces of a puzzle that can connect together to become "in this world" momentarily one thing.  When a man is inside a woman or another man or a woman puts her body in another woman, there is a momentary completeness. However, sex or entering the bodies are just examples of where this pointing goes.  When there is an entering of the body then the entire universe is one thing and when the removal happens it appears separate.  It is a reminder that we are all one, yet appearing seemingly separate.

However True Ulitimate Oneness, is what the bodies appear IN and when the attention has been placed there, then one knows they are not a man or a woman and have not ever been that.  Just because you get in your car in the morning does not make you your car.  The same is with bodies...so anyone thinking they are more special because of the body they are in are the same as thinking they are more special for the car they drive.  All are going to end up in the junk yard eventually.  But who you are, doesn't go to the junk yard...it has no level of hierarchy because there is no opposite to it...there is only That and it is you and it is me and it is everyone else because it is what we all appear IN.

Everything is resolved in this simple recognition.
Posted by Unknown at 6:02 AM