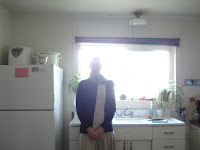 This is the second picture I've taken recently with the timer on the camera that has come through with the Light appearing and seems to be such a great pointer to what is becoming Known.  Light shines through all things and it appears only to be the beliefs and the thoughts about oneself and the world one appears in that momentarily hides the Light.  The less "you" the more Light.
Now I also know that one might think I am speaking about Joy(sters) in this world and in a sense one could use "Joy" in this world as an example but not as "the" example...just as an example of  what is being pointed to is what "Joy" and everyone is In.
The Light comes through you....you are in it and it is through you.  It can be hidden but it cannot be destroyed because it is not In this world it is through it.  Both the darkness and the light in this world are in the Light.  All ideas concepts and beliefs are in the Light.  And if you think you know what the Light is...then it is not the Light...it is only what the Light is in (a belief).
I was reading this morning about the prison system in America.  I have been hearing quite a bit about prison systems throughout the world lately and have some personal expierences with the prison system both by guards and innmates.  Both sides are in prison.  What I read this morning is that the injection that they put into the men before they kill them (men on death row) actually is an excruciatingly pain injection that causes a very painful death.  My heartbroke.  I was under the impression that we as a people had moved away from this kind of vengence.  I asked what can be done and sat for Meditation.  I then wrote a letter to a Friend that is in prison asking him to begin to speak to the men around him about becoming Anestiasologists, because anestiasologist, for whatever reason at this time, will not perform the injection that would stop the pain.  So this way the men in jail can begin to help themselves...they can begin to become productive as well as releive some of the pain that their brother men are experiencing.
Now maybe you are one of the ones that says ... well let them have their pain they wouldn't be there if they didn't deserve it.  Well maybe before you make that claim go and visit a man or women in jail.  See if you are a bringer of Light to them.  Because we are all born innocent and something happens in life that either rises us up or brings us down or numbs us to our ways of being in this world.  Go visit and then make your decision.  Because many of those on death row have made changes and it is because of those that got involved that they could See.
I am not saying this is an easy road.  But our prison systems are becoming big business.  And you don't know when it will affect you personally.  But why should it have too?  I guess it is time to write to the local board of Anastialogists if there is one and see if they are up for being the Light.
Light shines through all things.